The survey was entitled “Adult Adoptee Perceptions in Closed Adoption.” A link to the survey (through Survey Monkey) was shared on Facebook, Twitter, and this blog over a 2-week timeframe: September 26-October 10, 2017. In all, there were 1526 respondents. Of those, 227 were removed when parameter filters were saved because they did not meet the parameters set for the survey. One respondent was manually removed for revealing private names and locations. In its final form, there were 1298 respondents.

Questions 1-5 were required in order to set the parameters, as stated above. The remaining 81 questions were optional. There were 3 questions that were skipped by at least 1%(13) of the respondents: questions 69, 82, and 83. There was no question skipped by more than 17 respondents.

It was asked of the respondents what entity managed their adoption. Adoption agencies accounted for the majority answer with 36% (469). Private attorney was next with 15% (199). Charitable organizations came in third with 12% (162), but the majority of those who answered in the “other” comment section (129 respondents) referenced “Catholic Charities”. It is possible that if these responses were added to the “Charity Organization” option, it could equal or exceed those of private attorney. An option that was not given, but frequently mentioned in the comment section was “medical staff/doctor”. One respondent commented, “My adoptive moms father. He was a doctor and delivered me.”

The adoptive family structure consisted of a married mother and father who remained married throughout the respondent’s childhood in 80% (1,044) of incidents. Divorce during childhood was experienced in the lives of 14% (188) of respondents. Two respondents answered they were raised in a home with a gay/lesbian couple who remained together throughout the respondent’s childhood. 4% (60) of respondents answered in the “other” section. Death of an adoptive parent during childhood was not a given option, but was the most given answer in the “other” section. In one incident, a respondent lost both adoptive parents in childhood to death, “mother and father passed away.”

In regards to siblings, 20% (268) of respondents were raised as an only child. If there were siblings in the home, the option that received the majority response (45%, 593) was that their sibling(s) were adopted as well. The remainder of respondents reported mixtures that consisted of the adoptive family’s biological children, step-siblings, and/or foster care siblings. 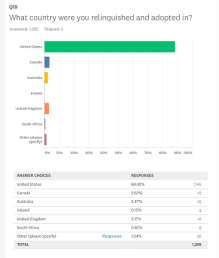 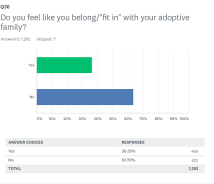 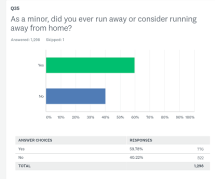 In regards to reasons (given by the respondent’s adoptive family) as to why the respondent was placed for adoption, there were a multitude of answers. The respondent was allowed to check all that applied and comment additional reasons in the “other” section. There was a three-way tie at 48% (629/630) with biological mother being unwed, young, and a general “better” life. The reasons with the least responses included abortion alternative (2% 38) and safety concern (1% 24). There were 144 (11%) free-from comments that included a diverse list; biological parents wanted to continue education, biological parents had too many other children, extra-marital affairs, race, rape, post-partum depression, biological parent was disabled, and biological parent was unfit among others.

Many respondents discovered the reason(s) they were given weren’t accurate. One respondent commented, “I was told my parents were finishing a degree in university. It is not true.” Another said, “I was told my mother died during child birth, which I found out later was a lie.”

There were as many diverse reasons given to respondents as to why their adoptive family’s adopted them. Respondents were also given the opportunity to check all options that applied as well as add comments if needed. Infertility received the most responses with 71% (930). The option with the second most responses was that the respondent was not given a reason at all with 13% (170). There were 149 (11%) free-form responses that included a multitude of reasons; adoptive family had a genetic disease they did not want to pass on, the respondent was simply “wanted/chosen”, vasectomy, they were adopted by the foster family, adoptive mother had a fear of pregnancy, and adoptive family had suffered stillborns/death of biological children. The responses also included more detailed stories of infertility and gender specifics (options provided).

Some of the more outstanding reasons included the following:

Outside of Family Life

Respondents were asked if they physically resembled their adoptive families and 65% (849) said they did not. When respondents were in public, they stated that their physical appearance in comparison to their adoptive families would be mentioned often (18% 237) or on occasion (41% 533). In the “other” comment section (2% 35), respondents stated that if their appearance wasn’t commented on directly, they did receive stares and/or behind the back comments, “No one commented out loud but I was always aware of the stares and double-takes. I’m very pale, blonde, blue eyes; my adoptive family is very dark.”

Some adoptive parents would introduce the respondent as the “adopted” child, “My mother would point out to others that I was adopted.” Another respondent said, “My adopted dad would say doesn’t she look just like me at times when introducing me…he would do it kiddingly..he was proud of me.”

Aside from public comments about physical appearance, the respondents were asked if the public would comment about their adoption directly. “No” received the most responses with 42% (555), and 11% (150) of respondents stated that no one knew that they were adopted.

Respondents were asked a number of questions about mental health. Counseling 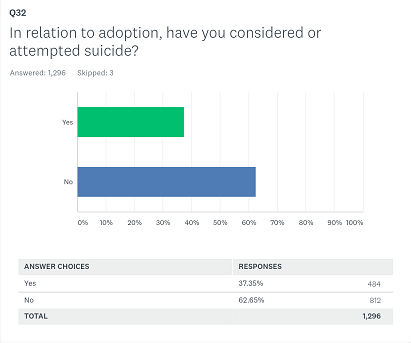 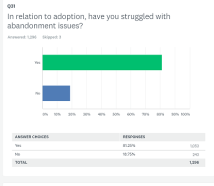 Aside from many options provided for why a search was initiated, there were 105 (8%) free-form responses. There were a multitude of reasons given including States opening access to Original Birth Certificates, adoptive parent encouragement, impending deaths, DNA availability, mental breakdowns, adoptive parent disownment, 9/11, and need for a passport.

One respondent stated, “After reading birth parents stories from that time era.. It was eye opening. It never occurred to me how different things were back then and that my bio parents may not have even had a choice about giving me up for adoption. That made me want to find out more about my history.” Another commented, “Adding adopted children to our family.” One respondent commented, “Found out that I could get non-identifying info from an adoption agency when our first grandchild was given for adoption. At that time of her ‘release’, I had stuffed my feelings of my own way down deep, so thought it was fine to give her up. It didn’t take long …like just a few weeks after her birth to finally allow myself since my being ‘given up’ to big time surface.”

Other commenters elaborated on their “missing piece” feelings, “Missing piece always felt even though was raised in a loving home. Medical issues occurred where course of treatment required medical history” and lastly, “It was part of my core that I needed to find my mother.”

Search for biological family elicited a number of free-form responses (16% 220). In regards to adoptive family responses to the respondent’s search, many carried similar themes such as waiting for the death of their adoptive parents, respondents were threatened with removal from the adoptive family’s will, mixed family reactions, disownment, and adoptive family saying they would support a search until it transpired.

“I did not tell them but they were told by a non-family member. They did not speak to me for two-years after they found out,” said one respondent. Another said, “I would have been beaten by my adoptive father, had he been alive.” Other comments included, “They didn’t understand the need”, “My mother was very supportive of me searching, my father was not in favor of it”, and “They were scared for me to be rejected again and use drugs to escape the pain.” 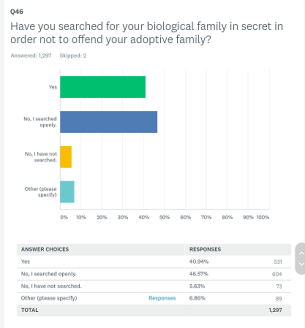 Adoption on a Personal Level 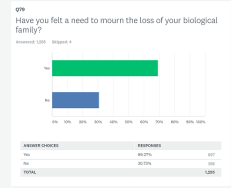 Adoption in the Big Picture

The remaining questions revolved around how the respondents viewed Closed Adoption  in general, from overall feelings to recommendations in practice.

Respondents were asked if they would consider themselves pro-adoption, anti-adoption, indifferent, or something other. Responses were pro 33% (438), anti 30% (388), indifferent 19% (247), and other 16% (219) respectively. Common “other” responses included a need for adoption reform, adoption education, dissolution of Closed Adoptions, attempts to preserve biological families, and adoption used only as a last resort after attempts to preserve a biological family.

Comments included, “Realist, communicate the potential difficulties of adoption and help members of the triad become better at listening to each other”, “I believe children in foster care should be adopted and biological families should be preserved and supported if possible”, and “I believe in changing many adoption laws and practices and that we should do everything we can to support parents to keep their children and in bio family placement whenever possible.”

Respondents were asked if Closed Adoption offered them a “better” life. “Yes” received 13% (177) of responses, “No” received 39% (512), and “Impossible to Say” received 44% (570).  Other comments received 2% (34) with the majority of responses stating that they had a “different” life, but not necessarily a “better” life. Respondents were also asked if Closed Adoption was the best arrangement for children or if there were better arrangements. They were asked to check all options that applied. Open Adoption received the most responses with 61% (789) closely followed by Preserving a Biological Family with 57% (732) of responses. Additional suggestions included taking profit out of adoption, supporting single parents, mandatory medical records, better sex education, and stewardship.

Respondents were asked what their overall feeling about adoption was as minors and as adults.

As minors, the most frequent responses were:

As adults, the most frequent responses were: 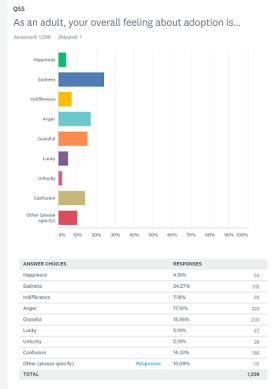 In conclusion, respondents were asked if there was anything they would like to add about how Closed Adoption had affected their lives. There were 792 responses and in order to dignify the efforts of these respondents, a separate blog will be posted to address them. It will be posted soon.

The survey can be seen in full at Survey Monkey:

Thank you to all respondents. Your efforts are greatly appreciated. If you find this survey of interest, please feel free to share it on social media.

Our current survey is for Natural/Birth Mothers in Closed Adoption. It will run through the end of October, 2017. Please share the link with anyone it may apply to:

Giving a voice to adoption. View all posts by adoptionsurveysblog

11 thoughts on “Results In: Adult Adoptee Perceptions in Closed Adoption”